Kodi is free open source media center software designed to play video, music, games and more.  It has been engineered in such a way to work on large TV sets or smaller devices.  There are several versions available to work on Windows, iOS, Linux and Android making it suitable for streaming media boxes.  I have compiled several of the best Kodi boxes currently available for sale all running on Android.  I do want to mention that Kodi itself is totally legal but some of the add-ons may be illegal so you should do your own research before installing them.

This box has a luxury or premium construction crafted from aluminum almost similar to a certain Apple based product.  You will find Android 6.0 software installed along with Kodi 16.1 fully loaded on this device.  Optical out and HDMI 2.0 will help you take full advantage of 4K viewing and home theater surround sound.  Another nice advantage to this box is it does have a dedicated LAN connection which will be needed due to lack of 802.11ac. The specs are great and except for the lack of 802.11ac it is a well rounded device and great for anyone looking to buy a Kodi box. 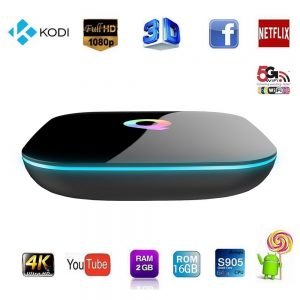 The Epteam Q Box comes fully loaded with Kodi right out of the box and 16GB of ROM for all the other goodies you might want to install later on.  This particular model comes with built in bluetooth allowing you to connect keyboards or mice wirelessly to help make installing and add new apps easier.  Another great feature is the dual band WIFI and wired gigabit LAN port to help stream those movies or sporting events with less delay.  I would have liked to see Android 6.0 but you shouldn’t have any problems or miss out on too many apps using Android 5.1 that comes pre-installed.  I highly recommend this Kodi box based on price and specifications. This is one of the few devices that includes 16GB of storage and has custom designed software which is completely upgradeable.  Most of the other boxes will be not have the capability to upgrade their standard OS.  Another feature of the custom OS is that it does support Amazon prime along with all of the other apps available from Android.  Great software and specs make this box a winner but the premium price tag might scare some people away from this feature filled device. 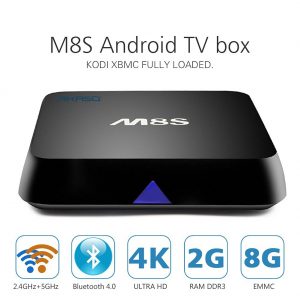 The AKASO M8S is another great option if you are looking for a fully loaded Kodi box.  Plenty of RAM and ROM will allow you to install all the necessary apps and add-ons to take full advantage of this media player.  Built-in dual band WIFI helps with streaming movies, shows and sporting events with less delay.  On the downside, this currently runs Android 4.4 which is plenty stable but may not have as many apps available as the newer versions.   Something else I would have liked to seen was HDMI 2.0 but for the price you cannot beat this AKASO Kodi box. 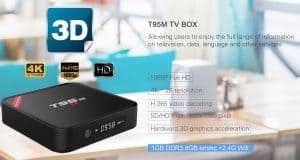 The Rominetak is only the box on the list that comes with a wireless touchpad keyboard.  I wish they had bumped up the 1GB RAM a little higher but they did include Android 6.0 and the 64 bit Amlogic S905X processor inside their device.  For such an unassuming device, they also managed to include HDMI 2.0 as part of the features. You are going to be paying a premium for this device since the keyboard is already included.  If you were looking to buy a keyboard anyways than I would definitely recommend this device. Overall the specs are good and this would be a nice fully loaded Kodi box to start with. 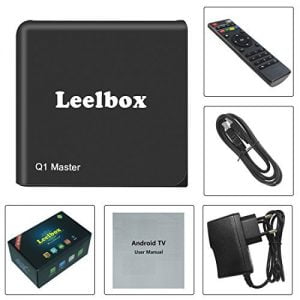 If you are looking for a good solid entry level Kodi box this is by far one of the most popular models.  It is not super flashy or has a ton high end specs but it does come with Android 6.0.  The CPU is solid along with other great features such as keyboard and mouse support this box will do everything most first time buyers will need.  I do wish this box had 2GB of Ram instead of just the 1GB that is comes with. The WIFI on this unit is just the 2.4GHz and not the dual band so it would be in your best interest to connect this box to the dedicated LAN port for improved streaming performance.  For the price, the Leelbox Q1 is a great Android Kodi box for the beginner or someone who is looking to add extra boxes through out the home. 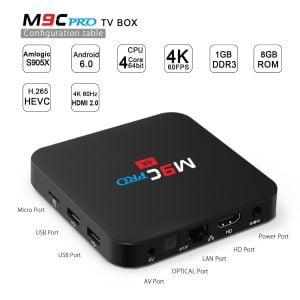 The reason that the TICTID M9C Pro is so popular among people looking for a Kodi box is features and price.  This device has the latest Android 6.0, great CPU and sleek simple remote control.  Though this device lacks a few things such as dual band WIFI and 2GB RAM it does offer a nice AV out that lets you connect to older televisions.  If you are just starting out or want a 2nd device for around the house I would not hesitate to pick up a TICTID M9C Pro streaming media device.

Thanks for checking out my list. I want to say that you might disagree about the order I have placed these boxes in but do not let the order fool you.  These are all great devices and anyone of them will be a great addition to your household.