Which is the Best Streaming Service For Sports?

Live sports have always been a huge draw for cable TV subscribers since the very beginning. However, as internet speeds have improved tremendously over the years, and the price per megabyte has become significantly cheaper, it is now easier than ever before to stream live sports online.

Traditionally, online streaming services would only include a handful of on-demand sports, which were streamed live. Occasionally they would throw in a few sports commentary shows. However, things are changing as now more online streaming services are focusing on live sports than ever before. If anything, many of them are worthy cable-replacement options, which offer live streams of international, national, and local sporting events.

The other big advantage of online streaming is the ability to record your favorite sporting events via the DVR recording service, and the support for multiple streams on different devices. However, because sports channels are a dime  a dozen choosing a platform that offers everything you need can be challenging.

Which Streaming Service for Sports Has Local Sports? 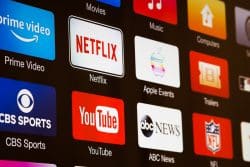 Now before we go into and talk about all the paid streaming services, we’d like to emphasize that not all sports events will require that you have a subscription to stream them online. Some major events, like The Masters and the Super Bowl, can be streamed for free online. Furthermore, nothing is stopping you from buying a TV antenna to get channels that air these sports for free. However, the quality and how many channels you can catch with an antenna will vary depending on your location.

Also, there are quite a few illegal options. For instance, numerous sketchy subreddits have links to streaming sites that are hosted on shady “ad site.” This means you need to click an advertisement every 10 minutes to keep streaming or something to that effect. That’s why we won’t recommend that you go down the rabbit hole of shady sports streaming websites.

Now that you know that some local sports can be streamed for free. You can also use a service like AT&T TV Now that streams a couple of local sports.

AT&T TV Now was previously called DirecTV Now. Not only has the streaming service been rebranded, but now they offer a pretty decent roster of local and national sports events. However, the local sports events are mostly available with their higher-priced packages. The higher-end packages stream CBS Sports Network, FS1, FS2, Olympic Channel, RSNs, SEC Network, and four ESPNs. So, you’re bound to find the hottest live streaming local sports.

The company also offers DVR features, including 20 hours of DVR storage, and you can record for up to 30 days. However, it is on par with many other services that offer similar DVR features. That said, what’s unique is the “Lookback” and “Rewind” features, which allows you to watch content that was previously aired. You can also rewind content 72 hours back and also restart live streams from the very beginning.

AT&T TV Now allows for streaming on up to two different devices at the same time. Plus, it is available on numerous media streaming devices via their apps.

Honestly, that’s a tough question to answer without knowing what type of sports you want to stream. Let’s start with Hulu Live TV, which is excellent for streaming local and national sports. The subscription includes leading sports networks like CBS Sports, BTN, ESPN channels, FS 1&2, NBC Sports, and the Golf Channel. However, it is missing NBA TV, the NFL Network, and the MLB Network. You also get  the option to pay for an Espanola add-on to stream international sports directly from ESPN Deportes via Hulu Live TV.

Hulu Live TV is a pretty decent cable replacement and offers plenty of sports channels for sports fans who want variety. It also has nearly as many news and entertainment channels as the best cable TV service provider. Plus, you also get a subscription to their Live TV service, which includes numerous on-demand shows. The best thing about Hulu Live TV and why many fans who want to stream live regional sports will opt for it, is the fact that they have excellent apps for just about all the latest gadgets from smart TVs, to the PlayStation. So, you can stream where ever you are on demand.

The drawback with Hulu Live TV is that all the channels, including live sports, is streamed in 720p. However, their on-demand content is streamed in 1080p, with a handful of content in 4K. So, if you are a sports fan interested in streaming in 1080p or 4K, then you’ll not get it with a Hulu Live TV subscription.

YouTube TV has an excellent selection of sports streaming options, which includes NBA TV, MLB Network, The Tennis Channel, in addition to all the ones that Hulu offers. You also can pay extra for Fox Soccer Plus, which most soccer fans will not mind, in addition to the NBA League Pass. So, there is a healthy dose of college sports, and regional sports.

The drawback of YouTube TV is that it does not have international channels or even the NFL Network. However, YouTube TV is the best option when it comes to the number of sports and other streaming options that it offers. Not to mention that the lineup of 80+ channels means that there is something for everyone. But YouTube TV is more expensive as compared to Hulu. The advantage of choosing YouTube TV is the unlimited cloud DVR storage. Recordings can be stored and re-watched unlimited times for 9 months, which is more than enough for most fans.

YouTube TV, despite being expensive, allows for streaming for sports on up to three devices at the same time. So, more people in the home can stream at the same time and not be bothered by the one sports fan invading the living room.

YouTube TV’s app looks great, performs very well, and sports channels are streamed in 1080p for the most part. Plus, PlayStation 4 owners can stream live TV and sports networks from their devices.

If we were to decide between the two, we’d pick YouTube TV only because it offers access to more regional sports and college sports channels as compared to Hulu. However, the more price-conscious sports fan or those on a strict budget may probably settle for the compromises that Hulu requires sports fans make.

What Is The Best Way To Stream Live Sports?

We always tell people that the best way to stream channels is on a device that is in their hands. So, if you mostly have an iPad in your hand, then the service should allow you to stream on the device. The same goes for if you spend most of your time in front of a computer screen. However, the “best way” for everyone to watch sports channels will vary.

When it comes to how you are watching sports networks, we don’t think that any other service can offer the flexibility that Amazon Prime Video has to offer. Amazon Prime Video’s sports streaming service incudes Thursday night NFL games. Subscribers also have the option to add many sports-centric channels to their subscription. You can add the channels based on the type of sports you want to add. For instance, golf fans who want to stream the PGA tour will probably add PGA Tour Live. Football fans will add the NBA League Pass etc.

Sports fans will also find that Amazon’s All or Nothing series that takes people behind the scenes of many professional sports leagues is well worth the subscription. However, they don’t cover as many sports as the competition. Though if you’re sharing a subscription with family members, the fact that there are many on-demand TV shows and various movies means that there is significant value.

In terms of how you stream, Amazon’s streaming service will work on all iOS devices, Android devices, Web browsers, game consoles, and Fire devices. Most modern Smart TVs come with Amazon’s app pre-installed. So, there is a great deal of flexibility here.

Now, if you are into streaming live sports, there are a couple of services like CBS All Access and Dazn which are considered amongst the best.

The beauty of CBS All Access is the fact that it gives subscribers the ability to live stream local CBS Sports as part of the subscription. Take, for instance, that football fans can stream live NFL games that are happening in their local market. Similarly, college sports fans can stream March Madness. Golf fans get to stream PGA Tour events.

CBS All Access is similar to Hulu because it allows subscribers to stream its  library of content which isn’t limited to sports by including original shows. However, the on-demand content is brought to you minus the commercials, but with the CBS All Access No Commercials plan.

CBS All Access has apps for iOS and Android devices, in addition to Roku, Android TV, Amazon Fire TV, and Chromecast. You can also find sports to stream on gaming consoles.

If you are a fight fan and want to stream live fights, then Dazen is the best streaming service for you. It does not require that you pay PPV or Pay-Per-View fees. You just pay the subscription costs and watch as many premium fights as you can.

A couple of other sports that can be streamed include fishing, cricket, J1, gymnastics, and soccer matches. Some original sports can also be streamed, which include MLB daily commentary live, the weekly, fighter focused show, etc.

Unfortunately, Dazn subscribers aren’t treated to DVR features, but every fight that you stream can be restarted stopped, rewinded and easily scrubbed. Users can stream content on two devices at the same time. All live events are streamed in 720p at 60 frames per second for some reason.

Now ESPN+ Isn’t a replacement for regular ESPN channels but is an alternative for live sports content. ESPN+ features a lot of live sports events that takes place on a regular basis, which include MLB, the PGA Tour, NHL, and various college sports leagues. However, the service does not include Monday Night Football streams or cover NBA games live.

Subscribers to ESPN+ get access to ESPN’s archives of shows like 30 for 30. Though core and most-watched ESPN shows like Around the Horn, NFL Live, and Pardon the Interruption, amongst others, are not available with the service.

ESPN+ can be streamed via their dedicated apps for FireTV, Andoid, tvOS, iOS, Roku, and Chromecast. However, you can stream on five devices at the same time.

Bottom line: There is No Streaming Service Only For Sports

While Americans love their sports, no streaming service only streams sports at the moment. However, there are more than enough sports to go around with just about any service that you choose. Unlike traditional cable television, now you have many more options and the ability to stream sports regardless of where you are.

The best streaming service you choose will primarily depend on the sports you want to stream. It will also depend if you just want to stream sports, or would you also want to stream other types of content too. At the end of the day, you can’t go wrong with any of the services we’ve listed above. That said that it is important to know that there is no one streaming service that streams every possible sporting event in the world…at least at the time of writing this article! So, you need to decide if NBC sports is more important than let’s say all of ESPN’s channels.