How to Play Hulu on TV from iPhone?

Your iPhone is a great way to catch up on your favorite shows on Hulu when you are away from home. Sometimes though, it is much better to use a bigger screen when one is available. Besides that, there are a few other reasons why you would want to play Hulu from your iPhone.

Hulu’s recent price reductions for their add-on services, announced in April 2019, means savings on DVR bundles. This will, no doubt, encourage more people to take up the service, though with some packages you are limited to the number of screens which can be used to display content. It costs $10 more per month for unlimited screens but if you only occasionally need this feature other options may be better.

Hulu doesn’t work on TV connected devices outside of your home Wi-Fi network. Getting around this restriction is possible by streaming from your iPhone. They do allow for customers to use three mobile devices at the same time beyond the home network.

If you are using your iPhone as a mobile hot spot to watch Hulu it can be better to stream instead. With data usage normally restricted when you create a mobile hot spot, this could leave you unable to stream after just 10 or 15 gigabytes of data use. Streaming video on your phone most likely isn’t restricted in the same way though you should check with your phone service provider.
There are 3 main ways to stream Hulu from your iPhone. All of them do require you to already have or purchase a device to make it work, however. In this article, we take a look at how to play Hulu on TV from iPhone. 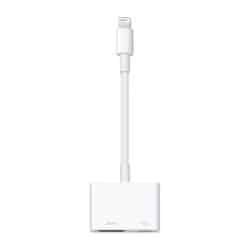 There are a number of reasons why connecting directly to a TV is the best option. Apple provides two options to connect your iPhone, one of the Lightning adapters is for HDMI and the other is to connect to a VGA port.

An adapter for your iPhone gets around any data restriction you may have on your phone plan and allows you to mirror what is on your iPhone screen to your TV. A previous update to the Hulu app had removed the ability to use the HDMI or VGA adapter in this way, but fortunately, they have bought it back.

Cheaper non-Apple versions are available as well though, but there is an issue with these. Despite the apparent cost saving, you may find that they don’t actually work as intended when trying to stream Hulu content. This is because the adapter needs to be compliant to the HDCP standard for it to work.

HDCP, the High-bandwidth Digital Content Protection standard, was created to protect digital content from being pirated. This prevents duplication of high-definition video and sound as it passes through connections like the HDMI adapter.

If you try using an adapter which isn’t HDCP compliant you may find that HD streaming isn’t possible or blocked completely. If you are looking to purchase a cheap Lightning to HDMI adapter cable make sure that it is HDCP compliant before you commit to buy. If you are able to read about other people’s experiences with the adapter this may be revealing, even if the seller claims it should work.

If you have an older iPhone like a 4S, for example, you can still get a 30 pin adapter to connect to HDMI. Though Apple no longer seems to sell these, you may be able to get one from a non-Apple manufacturer.

When you have your HDMI adapter it is simply a matter of connecting it to your iPhone and plugging in the HDMI cable. You will need to connect a Lightning cable between the HDMI adapter and a power source as well. Mirroring you screen will use a lot of power particularly if you are planning to use it for a few hours or more.
Once you have the cabling sorted out, select the source the HDMI cable is connected to on your TV and you should see your iPhone screen duplicated in front of you. Start the Hulu app as you normally would, choose the movie or show you want to watch and it will display on the TV at the same time.

If you have an Apple TV or a TV which supports the AirPlay 2 standard you can mirror your screen without the need for cables. Apple opened up their streaming standard for adoption by other manufacturers in 2019.

If you own a recent Sony, Samsung, LG or Vizio smart TV you may find that it is compatible with the AirPlay 2 standard. It doesn’t even need to be a brand new TV as some older models will gain this compatibility in software upgrades.

Your Apple or compatible TV needs to be connected to the same Wi-Fi network as your iPhone. Open the Hulu app and select the content you want to watch. There will be an AirPlay logo in the top area of the player window then select your Apple TV or compatible device. You need to make sure you are up to date with the Hulu app and be running iOS 11 or newer.

Google’s Chromecast allows you to send content to your TV, though it doesn’t allow you to mirror your iPhone in the same way that AirPlay does. If you have a Chromecast or Chromecast Ultra device the Hulu app is compatible.

It is a very similar process to connect and play using Chromecast as with AirPlay. Your iPhone and the Chromecast device need to be on the same home Wi-Fi network. Then you open Hulu

on your phone and tap the cast icon on the player of the movie or show you want to watch. Your iPhone will then act as your remote control for playback.

Streaming is possible on other devices as well as the ones we’ve already mentioned. These other ways which, should in theory work, but unfortunately don’t.

DLNA is a standard which is used across the industry to allow the sharing of data across home networks. DLNA was created by Sony in 2003 stands for Digital Living Network Alliance. If your TV has the ability to connect to the internet it probably supports the DLNA standard too.

However, as good as this may sound, it isn’t going to work. DRM (Digital Rights Management) stops this from working with Hulu.

If you have a Roku device which doesn’t already have Hulu on it, could it be possible to stream it from your iPhone? It isn’t currently isn’t supported by Hulu but there is the option of mirroring your screen. However, while this is possible with Windows and Android devices it isn’t possible on iOS. Perhaps in the future, this will be possible on Roku, but it isn’t currently an option.

Another option for casting from your phone is Kodi through a USB device attached to your TV. Kodi is an open source software program which has been created and built upon by over 500 developers. It allows you to install add-ons to customize the software to your needs and all this is entirely free.

Kodi can be installed on iPhones only if jailbroken, however. Jailbreaking your iPhone does allow you to install apps not authorized by Apple but comes with a number of dangers. You might end up bricking your phone, meaning that your phone is permanently damaged. You won’t receive updates, the warranty will be void and it could cause a security problem.

Even if you do go down this path there isn’t any official support from Hulu. There may be an unofficial app but this may also fail to work properly as DRM could still prevent the content playing. The Kodi developers are working on a DRM solution for its platform, with the hopes that this will allow official development of compatibility from Hulu and other streaming services.

Can You Stream Hulu from iPad to TV?

If you have the Hulu app on your iPad you can stream to your TV in the same ways mentioned for the iPhone. If you have an older iPad, like an iPad 2 or a third generation tablet, you will need a 30 pin connection for the HDMI adapter, otherwise, you can connect with the Lightning adapter.

How to Cast Hulu from Android to TV?

If you have an Android device your options for casting Hulu to your TV are more limited. Some of the options available for the iPhone aren’t available to you for obvious reasons. Naturally, AirPlay doesn’t work on Android but Chromecast will. Follow the same steps for the iOS devices above and it should work fine.

There are only currently three methods recommended by Hulu for streaming from your iPhone to a TV. They are all straightforward and easy, just as long as you have the equipment needed to make it work. Streaming from your iPhone isn’t perhaps the ideal solution in the long run, as it will shorten the life of the battery, but could be a valuable solution in the short term.