Why Is Netflix Not On Switch?

Nintendo Switch is well over three years since its release and still continues to entertain its 48 million-plus users across the world. Its past success is not only celebrated in terms of sales but the quality of games it continues to produce year after year. The Wii U was a little setback for Nintendo, but they managed to cover their mishaps with the Switch- and it’s working!

But not everything is sunshine and daisies for the Switch users. With what’s happening all over, games, “Netflix and chill,” among others, have become the norm for most people. But you won’t have the luxury of Netflix while using Switch- at least in the normal way. Nintendo Switch has a few streaming services like Hulu and Youtube but still lacks Netflix on its app store.

But three years down the line is surely a long time for Netflix to discover they are missing out on the millions of people who own the console. Yes, it is all on Netflix as they are responsible for developing the app exclusively. But with scanty reports and rumors, it is less likely they’re going to release a Netflix application anytime soon.

It still baffles many that Netflix hasn’t been able to develop such an application while they are pretty much all over. From Smart TVs to Xbox One, PS$, you name it. Netflix is a major streaming service and movie store for so many people. But this time Switch owner may feel a little left out. But from their point of view, it looks like Netflix assumes any Switch owner must also have some device that definitely has the app. Even if that were true, Netflix still needs to consider that people need more ways to watch, and an added device not only brings convenience but also a commitment to using their streaming service. 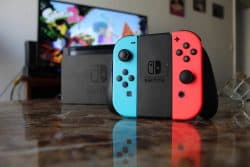 Was Netflix Ever Coming To Switch Anyways?

Three years ago when Switch launched, it was a debate whether they would add Netflix to their store for streaming purposes. If we roll back to previous versions and releases, Netflix actually had apps on a couple of Nintendo consoles. In particular, it was available on the Wii-U, Wii, and even the 3DS. Reggie Fils-Aime, former Nintendo president hinted that they were planning to have Nintendo Switch enabled with Amazon, Hulu, and Netflix but all would come in due time.

Well, he wasn’t far from the truth. Hulu did arrive on the Switch and users would enjoy amazing shows from it. Years later, Nintendo’s former president was still confident that Netflix would come, and that conversation about the application’s support was in place. But fast forward to 2020 and we’re still waiting for Netflix on the Nintendo Switch.

But if we flip over to Nintendo, the company seems confident that Netflix will avail an app for its console although the gaming company is not so keen on pushing the agenda. In fact, if you read between the lines, Nintendo has not so much been an open platform for third parties. From its game selections to recently streaming services, the company is having an “Apple-approach” to list services. Perhaps this helps them focus more on their customers’ needs.

Online forums may have an answer to the noticeable lax in pushing Netflix to release support for the Switch. Fans online have argued that adding Nintendo to the console may make it lose its bottom line which is for gaming purposes. It really doesn’t hold water, but it’s still an opinion.

If we look at past moves Nintendo has recently made, it may suggest that they are gearing up on adding more streaming platforms to the Switch. Back in January 2019, the gaming company announced that it was planning to shut down all its streaming services on older versions, most notably the Wii. These services were specifically Netflix, Crunchyroll, Hulu, and YouTube. The announcement obviously led to some notable companies to also pull their services on the old consoles. This obviously bought a loss to the company which is why they are most likely to recover by adding Netflix on newer consoles like the Switch.

So Can You Really Watch Netflix On Nintendo Switch?

The exciting news is that Netflix can actually play in Nintendo Switch- but as always, there’s a small catch. Officially, Nintendo has no Netflix app on the Switch but modders at XDA developers have found a way to access the streaming service and other apps on the Switch. So, for you to access these apps you’ll need to download an Android OS on the console and watch from there.

Since the console will run like an android platform, you’ll be able to run some popular android apps like Chrome, Twitch, and even Spotify. Some consumer reports suggest that the app won’t mess up your gaming and will run smoothly. But still, you’ll have to cut back on some features if you want to run the Android OS in Nintendo Switch. For instance, there is no support for camera, GPS, built-in microphone, and the Joycons too- bummer!

But that’s not all. You may also notice charging not detected but still charges the console. Plus, the battery isn’t great either. Either way, if you really want to watch from your Nintendo Switch, then you can afford a few compromises. Just remember that this method was developed by modders and you’ll have to perform every step at your own risk.

In the end, everything still remains confusing and we’re not sure who to put the blame on. It might be Nintendo’s focus on games which might lag the process or it could be Netflix getting comfortable in the streaming space which they dominate. But it is likely a combination of both factors until we get the final answer from one of the companies officiating the move or speaking up about the situation. The fact that we have waited for three years and going and still haven’t a release date is quite disappointing for Netflix lovers who have the Nintendo console.

Is Percy Jackson on Netflix?Do I Need To Watch Daredevil before Punisher?
How To Use Roku Stick On Laptop